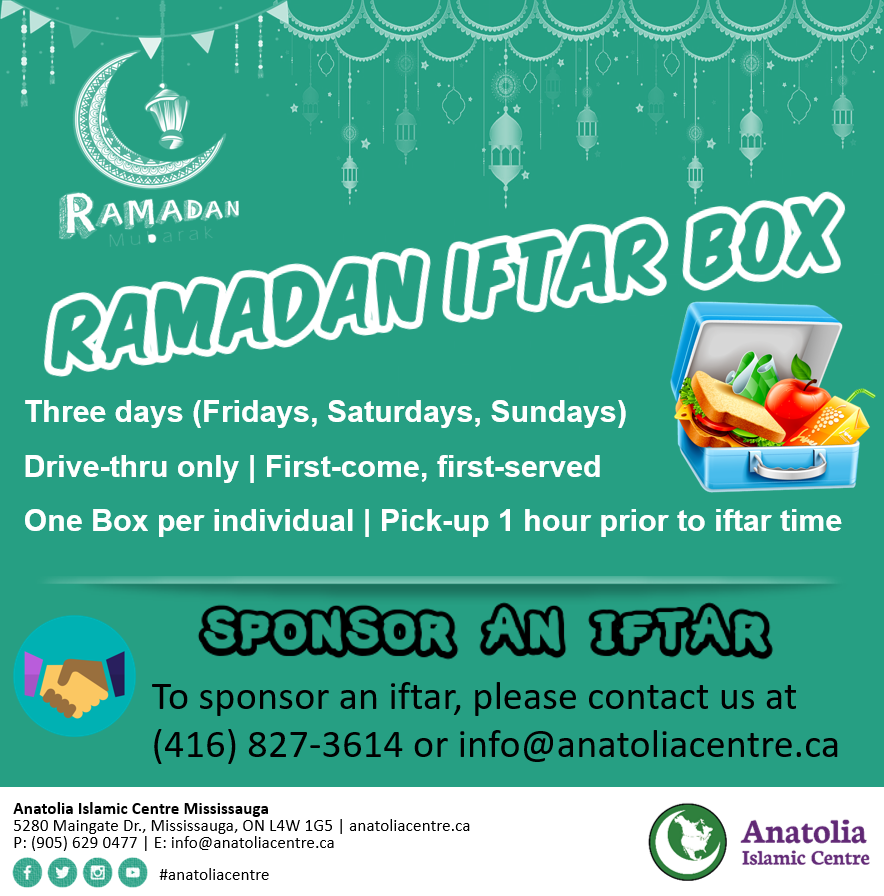 Anatolia Islamic Centre will be distributing iftar meal boxes during the month of Ramadan.  Every week on Fridays, Saturdays, Sundays the iftar boxes will be shared with the community via drive-thru first-come, first-served basis. Each person will be receiving one box. Pick-up time will be 1 hour prior to the iftar time. 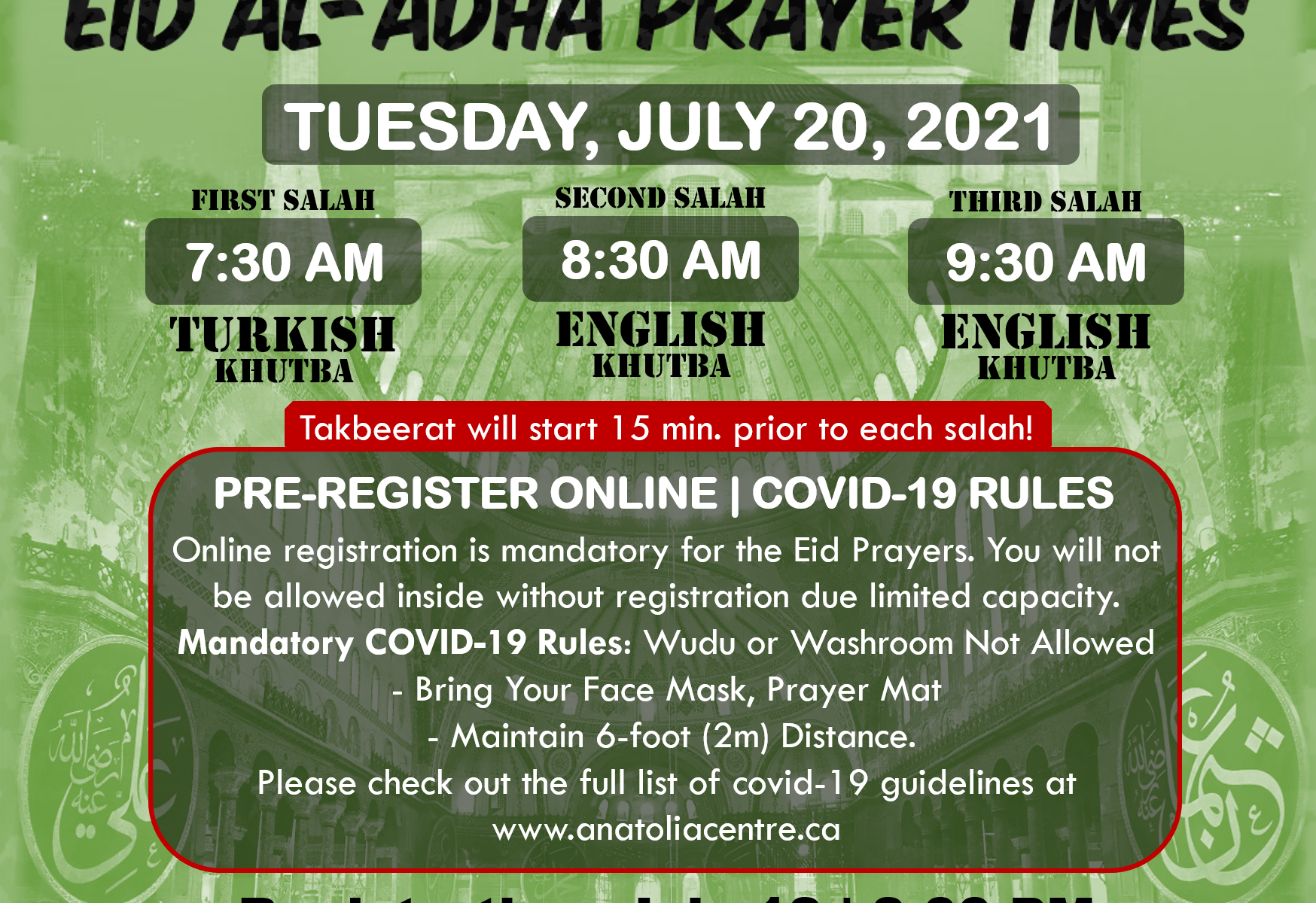 Eid Mubarak to you and your family!

Online Pre-Registration will open on Sunday, July 18 at 8pm (Link will be available below) We request everyone to abide by the Covid-19 guidelines mentioned below.  As required by the Ontario Government, OHSA & PHO guidelines mentioned (referenced HERE), anyone not abiding by these guidelines will NOT be permitted to enter the facility.  PLEASE REVIEW THESE GUIDELINES CAREFULLY for the sake of everyone’s safety: Appeal for the Masjid:

The Masjid can’t be maintained during this critical period without your financial support through Sadaqa and Zakat. Please be generous with your donation for the house of Allah. For general donations, please visit our website at anatoliacentre.ca/donations.

Anatolia Islamic Centre is confident that the Muslim community will undertake the difficult measures needed in such unprecedented times and put our trust in Allah.

Disclaimer: While the safety of our congregants is our top priority, there is still some risk present with visiting the masjid. Each individual bears responsibility  for their own actions and Anatolia Islamic Centre will not be liable for any complications in connection with or arising from your visit to the masjid.

Online Pre-registration is required to attend the Eid Prayers.  Please use THIS LINK TO REGISTER. (Link will be available on Sunday, July 18)

You are only allowed to register three people including yourself. Please include the names for EVERYONE and read the waiver and the COVID-19 guidelines and answers the questions accurately.  If you do not register you will not be permitted to enter the masjid and there is no exception.  There is limited capacity for the Eid Prayers so please register during the announced time frame. If you register but do not show up for your reservation, you’ll be denied to enter our facility for Eid Prayers. No Exceptions!

Anatolia Islamic Centre is proud to organize Karate Classes with Instructor Mr. Raafat Elfeky, Third Degree Black Belt, with over 40 years of experience in Karate and Martial Arts. Classes A is divided into two levels; level I for beginners and level II for those with yellow belts and or higher. On behalf of Anatolia Islamic Centre, we would like to thank you to all Religious Leaders for joining  the third annual Anatolia Taste of Ramadan Iftar Dinner.

Anatolia Islamic Centre was pleased to host religious leaders from the Sikh, Hindu, Jewish and Christian communities reflected on fasting within their religious traditions and brought greetings to the Muslim community on the occasion of Ramadan.

The Anatolia Taste of Ramadan Iftar program ended with a number of individuals being recognized for their contributions in various fields the Mississauga community.

Anatolia Islamic Centre (AIC) was established by Turkish Canadians in 1998. Our goal is to create a highly-esteemed organization that leads in advocating for the religious, moral and spiritual values of the Muslim society in Canada and to contribute to peace and tranquility for all mankind, and to be a prestigious mediator on Islamic issues.